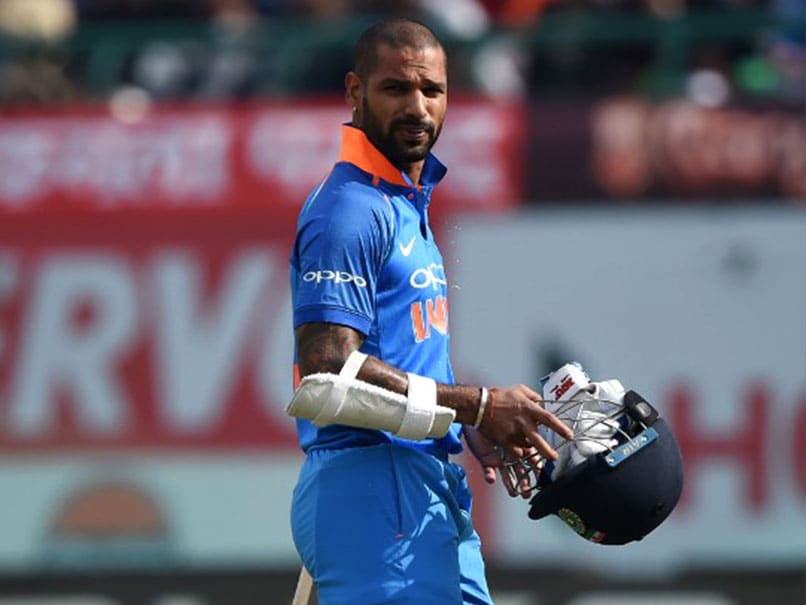 Shikhar Dhawan departs after being dismissed by Mathews for a duckPhoto Credit: AFP
11:38 IST: Huge LBW appeal from Mathews, on-field umpire turns down the appeal. But Thisara Perera and Mathews take their review.11:36 IST: Angelo Mathews is sharing the new ball with Lakmal.11:34 IST: Maiden first over for Sri Lanka.11:31 IST: the Brilliant first ball from Lakmal. Forcing Rohit to play as he edges the ball to second slip but the ball doesn’t carry.11:30 IST: Rohit Sharma and Shikhar Dhawan are opening the batting for India. Suranga Lakmal opening the bowling for Sri Lanka.11:25 IST: Both teams are on the ground for their respective national anthems.11:15 IST: Sri Lanka playing XI: Upul Tharanga, Danushka Gunathilaka, Lahiru Thirimanne, Angelo Mathews, Asela Gunaratne, Niroshan Dickwella(w), Thisara Perera(c), Sachith Pathirana, Suranga Lakmal, Akila Dananjaya, Nuwan Pradeep11:12 IST: Shreyas Iyer is making his ODI debut. Big day for the young cricketer. 11:11 IST: Team India playing XI:
https://twitter.com/BCCI/status/939731478514098176
11:03 IST: Team India practicing before the match.
https://twitter.com/BCCI/status/939727755125571584
11:00 IST: Sri Lanka captain Thisara Perera wins toss, opts to bowl.
https://twitter.com/BCCI/status/939730321179795456
10:44 IST: Kedar Jadhav has been ruled out with the hamstring injury and Shikhar Dhawan was down with a fever yesterday. It will be interesting to see India’s playing XI in the opening game10:42 IST: The 1st ODI between India and Sri Lanka will be played at the picturesque HPCA stadium at Dharamshala and India team minus Virat Kohli will eye another whitewash against depleted Sri Lanka side10:40 IST: Hello and welcome to the live blogDinesh Karthik and Mahendra Singh Dhoni are likely to take the next two slots. Kedar Jadhav has been ruled out due to injury, Shreyas Iyer or Manish Pandey might get a look-in. Karthik had scored a fifty in the two chances that he got in the West Indies series, while against New Zealand the wicket-keeper batsman hit scores of 37, 64 not out and 4 not out in the three games. Dhoni, on the other hand, had faced criticism when he struggled to get going in the second T20I against New Zealand which the hosts lost by 40 runs and the former skipper will look to silence his detractors. All-rounder Hardik Pandya will continue to be a vital cog in India’s wheel as he completes what has been an exceptional year in international cricket for him. One among orthodox leg-break bowler Yuzvendra Chahal and chinaman Kuldeep Yadav will be in the playing XI along with Axar Patel, whose primary job is to restrict runs. Jasprit Bumrah and Bhuvneshwar Kumar will spearhead the pace department and the visitors will have a tough time dealing with them in the opening as well as at death overs. Among others, it will be interesting to see if skipper Rohit decides to give rookie Siddarth Kaul a chance as a third pacer at the HPCA Stadium, which is expected to aid swing bowling.Sri Lanka has shown the stomach for a fight in the Delhi Test after barely managing to save the first Test in Kolkata and losing the second at Nagpur and they would be eager to erase the ignominy of losing 0-5 at home in September.The visitors were also humiliated 0-5 by Pakistan in their last bilateral series in October and it will take really a special effort from Thisara Perera’s men to tame India in their own backyard.For Sri Lanka, Kusal Perera and Asela Gunaratne are returning to the team after recovering from injuries and a lot will depend on these players.Sri Lanka will bank on young batsman Dhananjaya de Silva, who scored a fighting century in the third Test to force a draw at Delhi.Teams:India: Rohit Sharma (Captain), Shikhar Dhawan, Ajinkya Rahane, Shreyas Iyer, Manish Pandey, Washington Sundar, Dinesh Karthik, MS Dhoni (WK), Hardik Pandya, Axar Patel, Kuldeep Yadav, Yuzvendra Chahal, Jasprit Bumrah, Bhuvneshwar Kumar, Siddarth Kaul.Sri Lanka: Thisara Perera (capt), Upul Tharanga, Danushka Gunathilaka, Lahiru Thirimanne, Angelo Mathews, Asela Gunaratne, Niroshan Dickwella (wk), Chaturanga de Silva, Akila Dananjaya, Suranga Lakmal, Nuwan Pradeep, Sadeera Samarawickrama, Dhananjaya de Silva, Dushmantha Chameera, Sachith Pathirana, Kusal Perera.